24. When to Use the Answer Choices: A Test-Taking Strategy

GRE Resources
When to Use the Answer Choices

There are times when plugging in answer choices will help you find an answer faster than solving for a variable on a Quantitative Reasoning question or guessing what kind of words might fit best in the blank spaces on a Text Completion question.

You can use the answer choices to help you solve multiple-choice questions with variables.

Which of the following is a possible value of x?

The fastest way to solve this problem is by plugging the value of each answer choice into the variable. 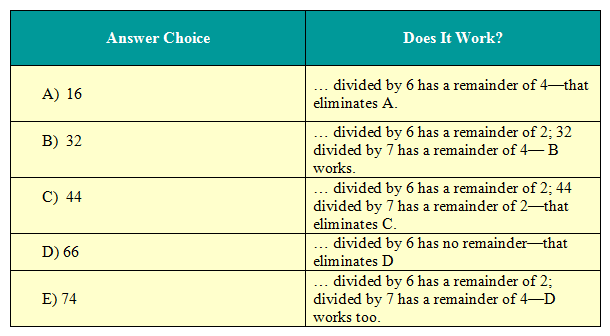 Answers: B and D

You may also need to use answer choices to solve Text Completion questions with 2 or 3 blanks.

Here's an example of a sentence in which you would need to use this strategy:

The leaders' ________ relationship was evident when they spent their time _________ each other during the negotiation.

No matter what, we can see how one part of the sentence relates to the other:

We need to see which pair of words would make sense together in this sentence.


When answering Text Completions, it will save you time if you focus on context clues. If there is not enough information, however, try to see which set of answers work together.