23. When to Avoid the Answer Choices: A Test-Taking Strategy

GRE Resources
When to Avoid the Answer Choices

Although you can sometimes use multiple choice answers to help you solve a problem, there are times when it is best to come up with your own answer before you look at the choices. On the paper-based test, you can cover them up with your hand, but on the computer-based test, you'll have to work on ignoring them while you think about the question. You can work on that while taking the Brainfuse practice tests.

Why should you do this?

Test makers need to come up with distractors as answer choices. They are those choices that may be associated with some part of the question, but they do not actually answer it.

You'll see a few examples of these in the questions below ...


When should you avoid looking at the choices?

As you read the sentence, use context clues to think about what words you would write in the blanks if you were writing this sentence. You may then take a look at the answer choices and search for synonyms.

A rowdy __________ occurred minutes after the announcement that the rebels' demands would be ignored.

If I were writing this sentence, I would add "protest." Now, I can look at the answer choices to see if there is a synonym of "protest." 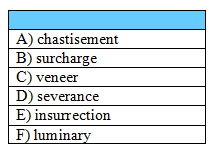 Choice E, "insurrection," is a synonym of "protest," but let's make sure that there are no other possibilities:


That makes our answer E.

So, what were the distractors? Notice that there were many negative words in the answer choices and one noun, "luminary," that would make sense if you only read the words before the blank space.

The type of word that is needed in some text completion questions may not be evident. If you are not sure whether a word should be positive or negative, you can look at the examples to see if there is a combination of words that work well together.

It is not clear whether this sign is a positive one or a negative one--Does it encourage the skier to try a difficult trail again, or does it warn the skier of falling rocks? There are no context clues to help us out.

In this case, we do need to look at the answer choices to figure out which pair of words will make the most sense in this sentence.

So, the answers are B and D.

Since there are many tempting answer choices on Sentence Equivalence questions, you should also cover up the answer choices when you first read the sentence.

The __________ character had to enter each scene with a box of tissues because he wept and told stories of woe throughout the play.

What word would you add to the blank if you were writing this sentence?

I know that this character is not too happy--he seems upset. So, I need to look for a word that has to do with being upset.

Now, we can look at the choices:

As a result, the answers must be A and C, which both relate to being upset.

Covering up the answers will be helpful on a few types of reading comprehension questions:

1. Multiple Choice with One Answer
2. Sentences in Bold

...So-called "starburst galaxies" produce stars at the equivalent of a thousand new suns per year. Now, astronomers have found starbursts that were churning out stars when the universe was just a billion years old.

"I find that pretty amazing," said Joaquin Vieira, a postdoctoral scholar at the California Institute of Technology and leader of the study. "These aren't normal galaxies. These galaxies [reveal star formation] at an extraordinary rate, when the universe was very young. I don't think anyone expected us to find galaxies like this so early in the history of the universe."

An international team of astronomers, whose work is reported in the March 14 issue of the journal Nature, found dozens of these galaxies with the National Science Foundation- (NSF) funded South Pole Telescope (SPT).

SPT is a 10-meter dish in Antarctica that surveys the sky in millimeter-wavelength light, whose waves fall between radio waves and infrared on the electromagnetic spectrum.

The team then took a more detailed look using the new Atacama Large Millimeter Array (ALMA) in Chile's Atacama Desert, which is funded in part by NSF. ALMA is an international facility and is a partnership between North America, Europe and East Asia in cooperation with the Republic of Chile.

"The new observations represent some of ALMA's most significant scientific results yet," Vieira said. "We couldn't have done this without the combination of SPT and ALMA. ALMA is so sensitive, it is going to change our view of the universe in many different ways."

1) What understanding does this finding alter?

Before looking at the answers to a multiple choice question with one possible answer, make sure to think about the response yourself.

I remember that a scientist described the team's study in the second paragraph, so I'm going to go back to that part to see ...

The leader of the study said: "These aren't normal galaxies. These galaxies [reveal star formation] at an extraordinary rate, when the universe was very young. I don't think anyone expected us to find galaxies like this so early in the history of the universe."

To make sure that I understand this passage, I can sum up this quote in my own words:

The team knew that these types of galaxies existed but found that they were active much earlier than they had expected.

I can now search for an answer choice to see which one is closest to my response:

While they are all true, Choice A is closest to my own answer and responds the question.


2) What is the purpose of each sentence in bold?


So-called "starburst galaxies" produce stars at the equivalent of a thousand new suns per year. Now, astronomers have found starbursts that were churning out stars when the universe was just a billion years old. Before looking at the answer choices, take time to notice how the first sentence relates to the second one on your own. This will help you avoid distractors that sound excellent but are not quite accurate.

I see that the first sentence is just a fact that was already known before this team started working.
The second sentence then builds on that fact with additional news about it.

So, which answer choice is closest to my own?

A) Oh no! I'm now not sure if this idea is a fact or a theory, so I'm going back to the passage:

So-called "starburst galaxies" produce stars at the equivalent of a thousand new suns per year.


In this passage, it is stated as a fact.

Make sure to memorize the order of the answer choices for these questions. The choices never change, so you do not have to waste any time examining each answer.

A) Quantity A is greater.
B) Quantity B is greater.
C) The two quantities are equal.
D) The relationship cannot be determined from the information given.