The organizational pattern of a passage provides an outline for the ideas to flow.

Perhaps the most common organizational pattern used in fiction writing is chronological, where ideas flow from one to the next in time order.  Nonfiction also can organize steps or information in time order.

Some signal words and the relationship they identify are shown below: 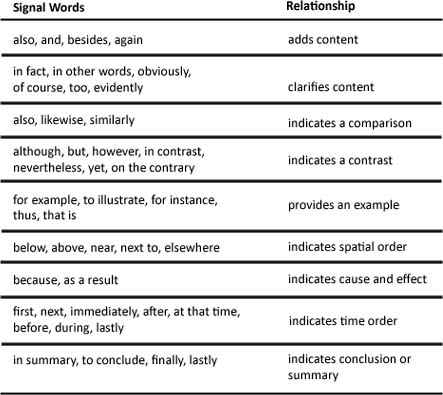 Understanding both the organizational pattern, and the logical flow of ideas identified by various signal words, helps readers better comprehend what they read.

Read the passage below.  Then answer the questions about the main idea of the passage and the use of signal words.

One of the earth's most spectacular activities is a volcanic eruption.  Volcanos erupt when magma, hot liquid rock originating below the surface of the earth, is forced up through a fissure to the earth's surface. Volcanos have been known to destroy entire islands and send out shock waves in the form of seismic sea waves or tsunami for thousands of miles.  The devastation is often widespread as molten lava, rocks, and gas are thrown out, forming cones.  After the volcano has erupted, a crater forms where the magma once flowed to the surface.  A crater is a hollow depression in the earth's surface and may be the site of another volcano months or years later.  If the crater and top section of the volcano are missing, a caldera, much wider than the crater, forms.  Calderas fill in the section where the cone once was.  Some small islands in the middle of former islands destroyed by volcanic activity are really calderas.  Anyone can see that the earth's surface is greatly changed by volcanic eruptions.

One such eruption occurred on August 27, 1883, when Krakatoa, an Indonesian island, experienced the greatest volcanic explosion people have ever recorded.  More than 6,000 people died when their villages were destroyed.  The volcanic rock was so fragmented when it exploded that it reached the stratosphere and was carried by wind currents all around the world.  The dust of these fragments caused beautiful red sunsets for several years.  Another result was the tsunami which sped across the ocean, sinking many ships and damaging other islands.  The force of this volcano was heard throughout an eighth of the world!

1.  Which sentence best states the main idea of this passage?

2.  In developing the passage, the organizational pattern used by the author could be described as --

Choose the word which best completes the sentence.

A)  and
B)  consequently
C)  therefore
D)  however

Choose the word which best completes the sentence.

4.  Sometimes the magma boils within the earth to the point of making the surface bulge up; _____________, it may find many small channels or fissures underground to leak through long before a volcanic explosion occurs.

German submarines controlled the sea during World War I, and many merchant ships went to the bottom with much needed food, auto and truck parts, and clothing needed to maintain the British army and its civilians.  1.______________, the British had to ration food and do without a great deal in order to maintain the army.  2._____________, just as they were almost out of food, the United States entered the war and helped the British break through the blockade.

Select the word that best completes the sentence.

The passage lists information and examples of a volcanic eruption in the first paragraph.  The second paragraph extends the listing of information by using an example.  Choice B is not correct because the overall passage is more than an example.  Choices A and C are incorrect because the passage neither states the cause of eruptions nor does it classify different types of volcanos.

The two sentences can best be joined by a word that contrasts the statements made before and after the semicolon.  The other choices do not provide a contrast.  "And" just adds to the meaning; "consequently" provides a cause/effect relationship; and "therefore" indicates that the second portion of the sentence is a result of the first.

Note that the first sentence gives details; sentence two is a result so "consequently" is a better transition than any of the others.

Sentence three describes what happened at the end of the blockade, so "finally" is a better transition between sentences two and three.