There are three ways to solve a system of linear equations: graphing, substitution, and elimination.

Lines that cross at a point (or points) are defined as a consistent system of equations. The place(s) where they cross are the solution(s) to the system.

Two equations that actually are the same line have an infinite number of solutions. This is an example of a dependent system of equations.

Solve the system of equations graphically.

Graph each line and determine where they cross. 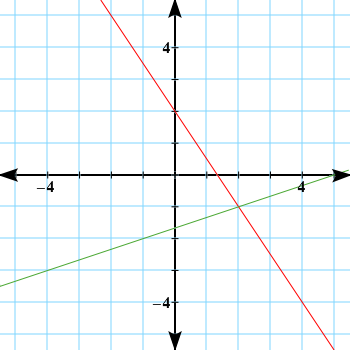 A graphic solution to a system of equations is only as accurate as the scale of the paper or precision of the lines. At times the point of intersection will need to be estimated on the graph. When an exact solution is necessary, the system should be solved algebraically, either by substitution or by elimination.

Solve the following system of equations by substitution.

Solve for a variable in either equation. (If possible, choose a variable that does not have a coefficient to avoid working with fractions.)

Rewrite this equation solved for x.

Then, substitute y = 5 into the equation that is solved for x to find x.

Find the solution to the system of equations by using the elimination method.

Isolate the variable in the new equation

Substitute x = 5 into either of the original equations to find y.

Identify the ordered pair that is the solution.   A check in both equations will show that (5, −2) is a solution.

It may be necessary to multiply one or both of the equations in the system by a constant in order to obtain a variable that can be eliminated by addition. For example, consider the system of equations below:

Both sides of the second equation above could be multiplied by −3. Multiplying the equation by the same number on both sides does not change the value of the equation. It will result in an equation whereby the x values can be eliminated through addition.

In some circumstances, both variables will drop out when adding the equations. If the resulting expression is not true, then the system is inconsistent and has no solution.

The equation is false.  The system has no solution.

If both variables drop out and the resulting expression is true, then the system is dependent and has infinite solutions.

The equation is true.  The system has an infinite number of solutions.  (Notice that both of the original equations reduce to 2x + 5y = 8.  All solutions to the system lie on this line.)