Two numbers are opposites if they have the same absolute value but different signs. Opposites are the same distance from 0 on a number line, and they are on opposite sides of 0. The opposite of 0 is 0.

Graph -3 and 1.  Define their order relationship.

Place the correct symbol, < or >, between the two numbers. 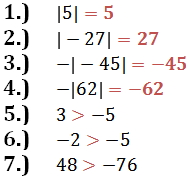