Theoretical probability (P) is calculated by:

One playing card is drawn from a standard deck of cards. What is the probability that the card drawn will be a king (K)?

There are 52 cards in a deck and there are four kings (K), one of each suit: 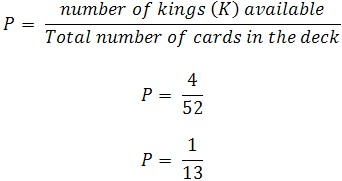